Looking for some tips on getting the best out of your Sons of Sanguinius? Want some simple ways of making your Blood Angels look good without having to get an art diploma first? Well let's get started then, and show you how to paint this Blood Angels Intercessor Space Marine.

Blood Angels were one of my first armies in 40K, and a favourite of many a neophyte and veteran alike. Their red colour scheme, along with Dark Angels Green and Ultramarines Blue, is one of the standard newbie palettes that can look good with only a little bit of skill. Like the others in that little triumvirate, it still has ways you can tweak it to be really great looking on table top.

What I've done here is nothing more than the standard Games Workshop recommended paint scheme, with some tweaks and tips to get to that 'eavy metal stage. I often see people copying what comes out of the Citadel Paint App or Duncan's videos, and never quite getting these results (usually darker without as much shiny quality to the armour). There are some really simple things you can do to get that gloriously bright, blood red to terracotta armour.

Step 0: Don't forget to thin your paints with a little bit of water. 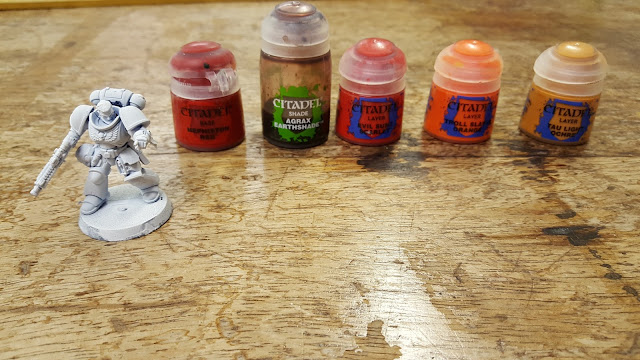 Some guides suggest you can go with a black undercoat, but the resulting red is always darker than what you want. I haven't experimented with going straight to a red undercoat, but there are some parts on this model in particular that we want to under coat in white anyway. 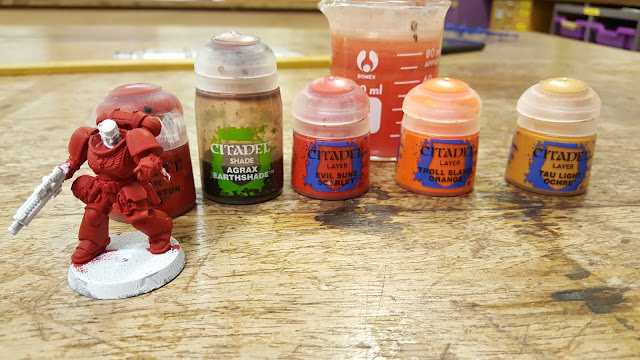 No surprises here, go with Mephiston Red. Go with two or three thin coats to build up that nice solid and smooth colour. Spend a bit of time getting this right, as we're going to be leaving this as the actual colour for the armour, and not messing around with it too much.

This is perhaps where a lot of painting guides fall down. When this colour goes onto a white under coat it comes out as a nice bright red. If you start with a black or grey undercoat, you tend to get a darker colour, despite Mephiston Red having quite a strong pigment as a base paint. Then they start to over correct with layer paints or tricky highlights (I've even seen people desperately wet blending into orange to get this right). 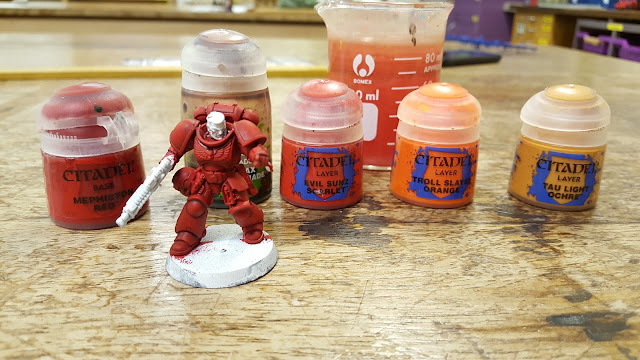 Agrax Earthshade as a pin or recess shade works really well here. You don't even need to be all that careful with it, as the brown blends quite well with the red.

It can be a little time consuming to do shading like this, which is why I've always been lazy and done all over washes with Carrabourg Crimson. Whilst that gives a really nice dramatic red (like with my Remembrance Day Poppy holders), it's rather dark. It's also a pain in the neck to repaint all those panels in Mephiston Red. Take your time doing the pin wash, it's easier in the end. 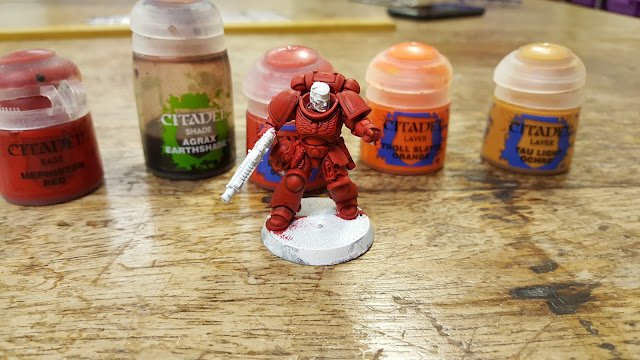 Now we add a layer of Evil Sunz scarlet, running around the edge of the armour panels and any curved surfaces. It goes on brighter than it dries, so don't worry if it looks like your lines are standing out too much.

The first tip at this stage is paint a line around the inside of the shoulder pad, just beyond the shadow. Due to the way light reflects on curved surfaces, this mimics a nice generic light source.

The second tip is to not bothering highlighting parts of the model pointing at the ground. Save yourself some time, since these parts shouldn't be reflecting light anyway. 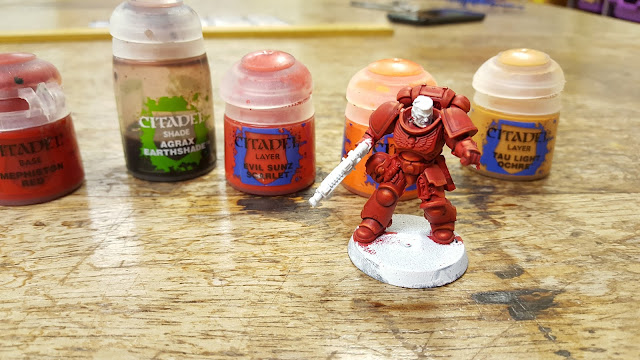 Games Workshop recommends Fire Dragon Bright, but I've found this to be a bit too pale as a highlight. I go with Troll Slayer Orange. it has a touch more red to it, making it transition from Evil Sunz Scarlet more easily.

It's not because the paint budget has run out for my club, and I can't afford to get a pot of Fire Dragon Bright...

The top tip here is to only highlight two things:


If you find yourself spending forever on this stage, you've probably added too much. This took about two minutes for me, and one of those minutes was just thinking about where to put the paint.

Your rank and file troops can pretty much stop here. But if you want to push that extra shine, then... 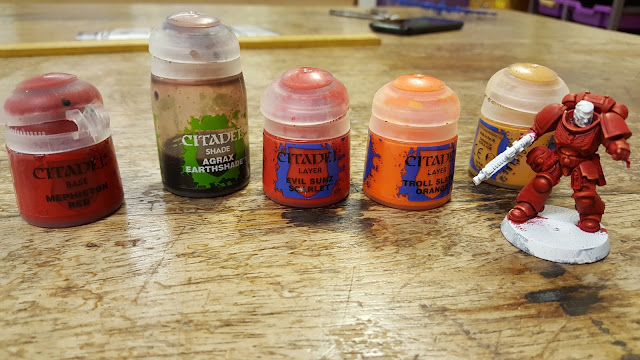 Tau Light Ochre. Seriously. It's a very light, orange-ish brown, and it works fantastically well as a final highlight.

This takes seconds, and its tiny spots or grazes of paint to the extremes of what you highlighted earlier; the centre of long panel edges, or corners where two lines meet.

Here's where you can get proper arty though... if you decide to have a dynamic light source, you can have your highlights all line up leading to where that light source should be. See below to see how the foot highlights are slightly off centre to create this effect.

﻿
And that's the red armour done! 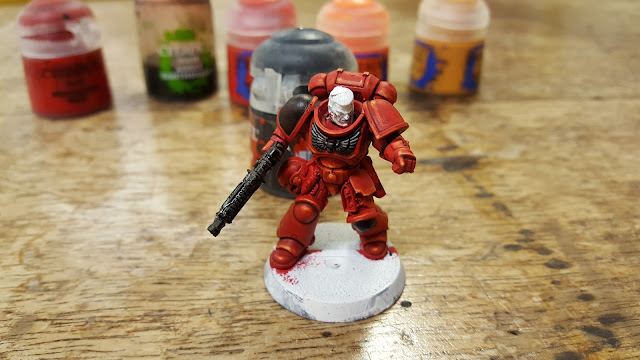 Abaddon Black to areas of the armour you want to be black. I didn't plan this well, and I'm painting over some of the highlight work I've done. Of course, you can save yourself some time by not highlighting those areas.

Strangely enough, you will need to put on the black in two thin coats. Red pokes through the black quite obviously, and you'll want to make sure you have a solid colour. 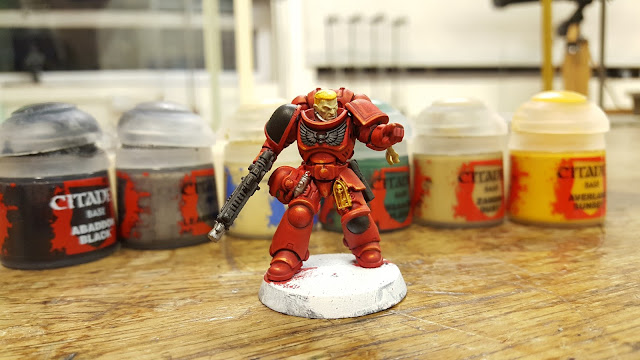 I kind of hate it when painting guides go from the big obvious parts of the armour to a fully painted model in one edit, but in this case it's somewhat true. This can take a bit of time, but we're not going into the same level of detail as with the armour.

This is not because we're lazy (at least not entirely), but because the red really is the star of the model, and we want people to notice that instead of a really well painted purity seal.

Retributor Armour: Gold bits
Abaddon black: Leather and pouch bits that should have been done in the previous stage...
Leadbelcher: Metal bits
Zandri dust: Paper bits
WAAGGHH!! Flesh: Lenses and optics (trust me, they clash against the red well)
Averland Susnset: The gorgeously angelic blonde hair gifted to the BAngels by their actually-an-Angel Primarch.
Ushabti Bone: The skin (although you can leave this white for a similar effect)

Most of these paints can be found in the standard starter paint set, so it's not too hefty on the budget. 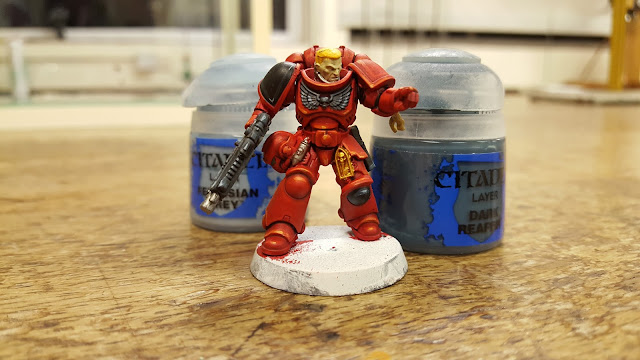 Dark Reaper highlighting the black with the same tips as Evil Sunz Scarlet before. Try to keep your lines thin for this though, black is a little more unforgiving in terms of highlights than red. Don't be afraid to go back to black to tidy up any lines that are too thick.

Fenrisian Grey goes on as a spot highlight. 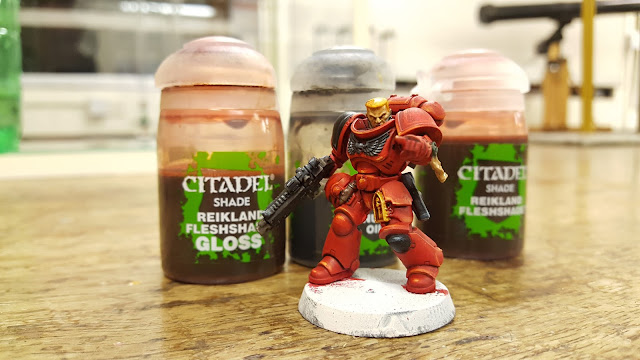 Washes rather than shades, as we're just covering all the other parts we've done before:

This essentially completes the model. The Fleshshade does all the work in making the skin and hair look natural, and you really don't have to more than that.

The only other thing we need to do is white and black for the eyes. Sadly there's no real tip for this, other than having a really pointy brush and some patience. The eyes took me about three or four goes to get right in the end.

At this point you could also put a dot of Ceramite White on the lenses and glass parts of the model: 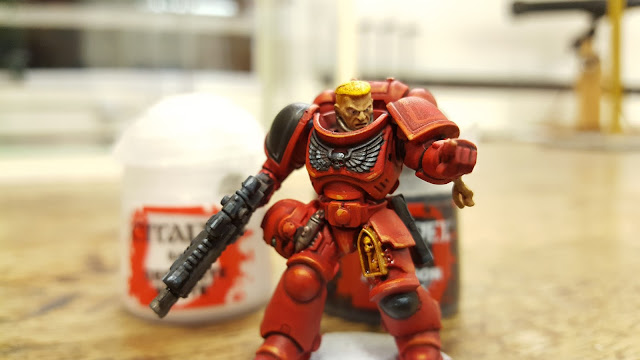 
Base however you like really. I've really converted to the new texture paints Games Workshop has. They make some really nice looking bases without too much hassle. The model below has Agrellan Earth along with some static grass and a grey paint around the rim. 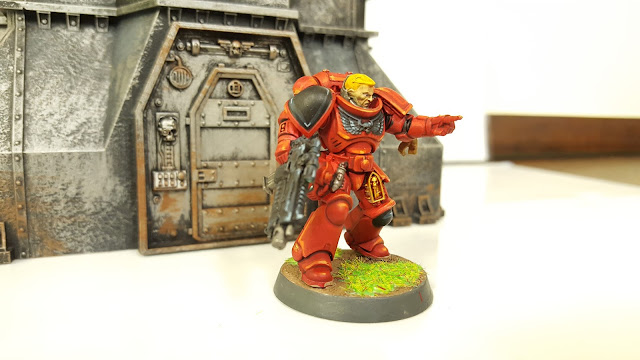 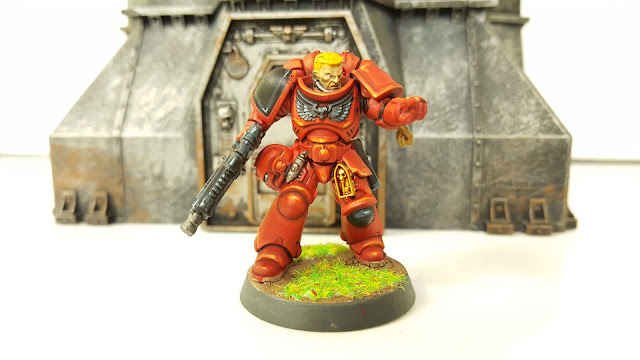 And that's it! See how bright that red comes out? Hope this helps some new Blood Angels players to get their desired effect. If this guide has inspired you to go out and buy a load of the Sons of Sanguinius, you could support the blog (and my school club) buy purchasing through any of the affiliate links below. 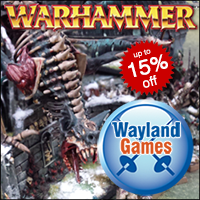 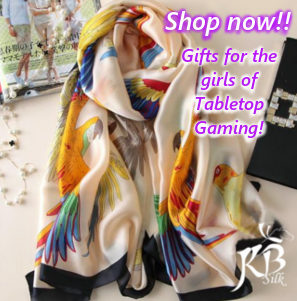 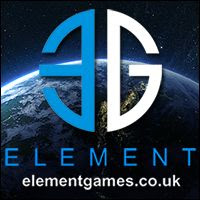