The Next project: Thousand Sons and Turning to Chaos 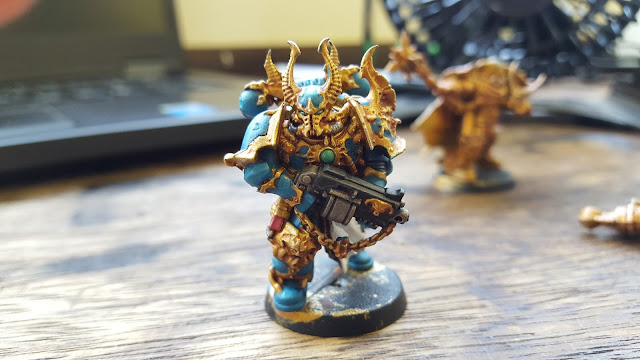 You know, it's funny sometimes how a simple thing like a Twitter poll can kick off a great deal of change.


That's a Tzeentch pun, by the way.


Anyway. Thousand Sons were voted to be the next project, which means this chap here gets to look smug for the camera. Under his helmet is the biggest, cheesiest grin for getting one over on the Wolves of Fenris!


I'll be picking up my new army by the end of the week, and may even have it finished by the end of the month. But what's even more exciting for me is the complete change of attitude I've had to Chaos Space Marines!


I've traditionally stuck with the Loyalists, for a number of reasons. But after painting the chap up there, I found myself having far more fun than with any normal Space Marine (excluding the Space marine Police Force). I've also been doing some serious research on the new Traitor Legion rules, and been getting really inspired.


I think this year will be the year of Chaos for me, as I tarnish my soul with the corruption of the 4 Gods.


For those of you that voted in the polls, you have my absolute thanks. You've helped me make a decision, and get started on a brand new chapter of my 40K hobby.

If you really love what I do here, you can make a one off donation at my PayPal, or become a true hero to table top education and make a regular donation to my Patreon. Every Little helps!
Chaos Thousand Sons Warhammer 40K