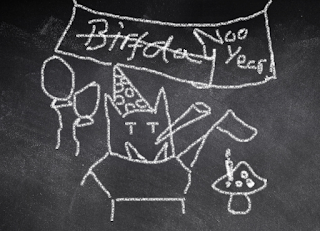 Good morning all, and welcome to the New Year!

And now a new solid project for myself, the club, and the blog.

First of all is a brand new army for myself.

A little while ago I did a numerical analysis of the Eldar Jetbike unit. Well I had a good reason to. I'm going to start collecting Eldar... oddly enough starting with the Start Collecting! Eldar box.

You may be thinking that I'm just a power gamer at this point, having proved through maths and analysis that the scatter bike is too powerful for it's cost. In my defense, the reason I did the analysis in the first place was because I had already bought the kits, and wanted to justify the cost to myself (and to a lesser degree, my wife).

As the school budget, Patreon and Paypal links below suggest, I don't exactly have a lot of disposable income for this hobby. This Eldar project had been a pipe dream of mine since the year before last year, and was actually the first codex I bought when getting back into the hobby. The only thing that stopped me was the cost of creating a jetbike army.

It may not seem like a lot of money to some people, but we rarely have the spare £100 to drop on toy soldiers. When the Start Collecting! Eldar kit came out, I started making the necessary budget steps, and finally was able to get going on finishing a 450 point School's League legal army. There are some Guardians I bought a looong time ago which will add to the bikes and Farseer to fill out a Combined Arms Detachment.

Look forward to the New Dawn Craftworld and their Path to Glory in the next coming months, particularly being woven into...


How to run the club: External Events

The School's League competition has kind of fell through this year. It was a little optimistic to get those armies up and running when the majority of students didn't have any exposure to 40K in the first place. However, that's not going to stop me from organizing friendly matches with other local schools.

Even though the School's league was a bit of a bust for us, there are a number of events taking place at our local Games Workshop that are going to be happening in the next few months. I'm going to get my students involved in them, and I'll also be getting involved in them myself.

The first one s a Brushido event, which is going to be painting any mini bought in December and January from the shop. I'm going to be entering as soon as I pick up one of the new Dire Avenger and Wave Serpent box sets.

The other two events taking place are a 40K campaign and an Age of Sigmar campaign. As much as I'd like to do both, I'm going to be concentrating on the 40K campaign. The New Dawn Eldar from above will be the entrants in the campaign, and I can bulk out the new force with club Tau for larger engagements.

Yes, it's Scatter bikes with a support Riptide, but it's literally all I have.

The goals for the blog are roughly the same as always: Produce posts every day and try to expand the readership. The average views per post is still hovering at around the same it's always done, and I'll need to improve that over this year.

I also mentioned paid posts on Friday for scenarios and teaching materials. That will go ahead starting this week.

I'm also going to start writing bits of fiction for my armies. It's something I dream up regularly to justify taking certain units despite them being fairly rubbish compared to the metas out there. What's 40K without a good narrative to follow?

Also as a last thing; If you have any topics or news articles you'd like me to look at, please let me know in the comments below. One of the great things about a daily blog as compared to the monthly White Dwarf is that I can directly respond to questions almost within a day... meaning you get to read content you like, rather than what I think you'd like.

All right, I have to get to painting now. Until next time!

If you really love what I do here, you can make a one off donation at my PayPal, or become a true hero to table top education and make a regular donation to my Patreon. Every Little helps!
ageofsigmar Bloodbowl dungeonsanddragons warhammer40K WarhammerCommunity