Gathering Storm 2: The Death of Slaanesh 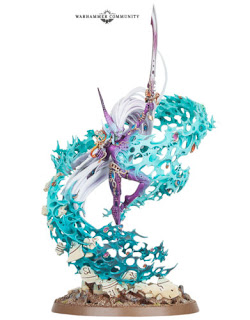 The more I look at this image, the more Slaaneshi it looks. Here's a few picture of a Forge World demon for comparison.

On it's own it's just a coincidence. And why wouldn't they look similar? They are essentially both creations of the Eldar psyche. One's just a bit more House and the other more death metal (actually I don't know if that's an apt comparison... I'm musically inept).


But then I stumbled across an article which made me think again.


"Cegorach, the Laughing God, reportedly is the only intact Eldar god to escape the fall of the Eldar, and has been planning his ‘final act’ since the Fall of the Eldar.


‘On the last day Cegorach will gather all the dead of his peoples and give them to the mustering Lord of the Dead to aid him in combating the Prince of Pleasure so that they may be reborn in a new earthly shell.’ – Attributed to a disguised Cegorach

At the heart of the Black Library lies a crystalline book that is said to contain the words of Cegorach himself.


‘Now long awaited portents have come to pass, and the bands of light around the book have flicked and died, and within the pages are recorded Cegorach’s final jest, a way to trick Slaanesh into expending all her power not to destroy the Eldar, but to save them.’"

Prophecies and portents are always intentionally unclear so that people can twist them to whatever actually happens. But the last bit their, where Cegorach tricks Slaanesh into expending all his/her power into saving the Eldar.


What if this was to awaken Ynnead?


The Death Masque storyline talked about gathering all of the souls on a planet, and using them to birth Ynnead. There are some (far more likely) theories, that Biel-Tan's Craftworld Infinity matrix will be sacrificed to create the Death god. The common theme is that Eldar souls are needed to create a god, just as with the birth of Slaanesh.


As in Slaanesh is a great reservoir of Eldar souls.


Cegorach could well intend to use Slaanesh herself to create Ynnead, tricking him into fusing with other Eldar souls, and finally putting the Eldar afterlife into it's proper function. Eldar are meant to die and be reborn, but Slaanesh only performs part of that process. She hoovers up Eldar Souls, but then does not release them back into the material world. Slaanesh, for all her pleasure worshipers, is already an Eldar god of Death.


The above sparks off this idea, but I have some other pieces of evidence. One is rooted in fluff, and one rooted in real-world meta analysis.


The fluff is the following tablet of Eldar runes, which appears to detail the various faction of the Eldar: 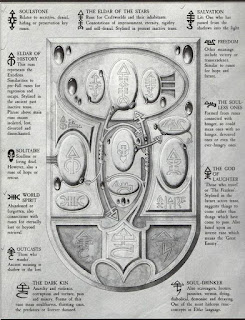 You can guess the top are the Craftworlders, the bottom the Dark Eldar, the left the old Eldar Exodites, and the right the Harlequins. The lines represent various interactions between the factions.


The center rune is the Solitaire, and that title belongs not only to the living dead as spoken about in the rune's description, but also a specific Harlequin. This Harlequin takes on the role of Slaanesh in their plays and dances.


Look at the line leading away from the Solitaire rune. it leads directly to the rune for Freedom. This then leads to Cegorach. The Solitaire rune itself can also be a symbol for hope... it could well mean that the creator of this tablet knew of Cegorach's plan to use Slaanesh himself as the great salvation for the Eldar!


Finally, have you noticed how these leading characters and factions have come in threes?


Do you know how there are four gods of chaos?


Do you know how Slaanesh has yet to appear in Age of Sigmar?


Do you know how Games Workshop have been hesitant to release anything to do with Slaanesh?


Wouldn't it be convenient if Slaanesh were to not disappear entirely, but be folded into a new role?


We could very well be witness to the first death of a Chaos god.

If you really love what I do here, you can make a one off donation at my PayPal, or become a true hero to table top education and make a regular donation to my Patreon. Every Little helps!
Aeldar/Eldar Chaos Fluff Warhammer 40K