Debating: Getting it wrong 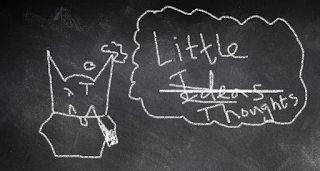 So, the above Twitee and I had a little tiff over some differences in opinion. They didn't like it when I suggested that the latest Rumour Engine picture was an example of ineffective marketing.

Who they are isn't actually important to the content of this, and since they've seen fit to delete the tweets where we had our little internet scuffle, I pretty sure they've realized just how embarrassing what they were saying was. No need for naming and shaming, and if you're thinking of looking for who this was I urge you not to. As they have taken it upon themselves to delete the tweets, I think I can claim victory.

I think that's all I'm going to do in terms of protecting this person though. I'm still human, and did take a great deal of offence at how they treated me, with all the unprovoked attacks on my character. I'd like to remind them, that they came after me, and thus I owe you not a damned thing when it comes to the aftermath. You may think you have covered your tracks, but cached files are a thing that exist, and screenshots are something even my eleven-year old students can do.

That aside, it is a really good example of how not to 'debate' someone, and includes a number of pitfalls and traps that everyone falls into. Let's look at some of them. I actually have to say, I was genuinely impressed at the sheer concentration of logical fallacies in such a short amount of time. Let's get stuck in! 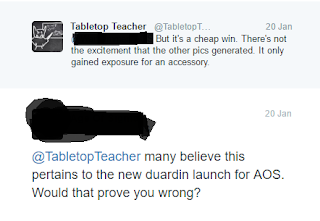 This is known as Begging the question.

It's a statement that has already assumed a conclusion, in this case that there is an incoming Duardin release, and therefore my line of reasoning must be wrong. It's an assumed conclusion with no evidence to support it, and no logic to get you to that conclusion.

It's essentially a gamble made on faith. You really have to hope there is a Duardin release, otherwise your entire premise is faulty. The response to this is to remind them... 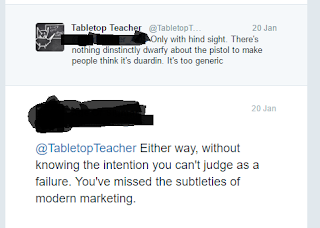 This is a simple unfounded assumption. The assumption is that I do not know the intention of marketing... which is weird, as marketing only has one intention; exposure of products. How that is done is what's being debated here and the reason why I wrote the blog post in the first place.

The second sentence is an attempt at Poisoning the Well, and it's a fallacy that is repeated quite a few times. They're essentially trying to discredit me by claiming that I've missed something. The issue here is that they haven't told me what they've missed. I probably have, but the person tweeting probably has missed it as well. Otherwise they'd curb stop my reasoning with their new information.

We've also started seeing hints that they've assumed they are more intelligent than me. This is the most important thing to avoid in any debate. The person and their intelligence does not matter in the slightest. The most uneducated person in most countries now can tell you that washing your hands after going to the bathroom is a good idea to clean off the germs. Sir Isaac Newton, for all his gifts with Physics, probably didn't know that.

The only thing you need to consider is the facts and information in front of you. The person saying them is actually kind of superfluous, especially in a written debate. 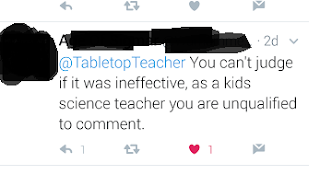 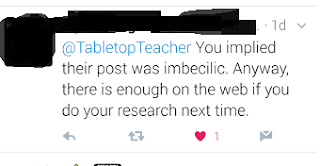 These next couple are simple Ad Hominem attacks. Rather than going after my points, the tweeter is trying to call my personality into question, in an attempt to either embarrass me into silence or simply claim some sort of moral high ground. It fails here, because no one cares who I am in the first place. It further fails because I can see the intention, and won't let the tweeter get away with shutting down the debate that way.

Scattered throughout this is a continuing Straw Man, that I am somehow a person that hates Games Workshop, and is trying to look smarter than I am. A Straw Man argument is one where you don't attack the actual argument presented, but create a different one which is easier to defeat. I never said Games Workshop Marketing was naive, or bad at their job, and in fact put it particularly mildly that they had made 'A strange misstep'. 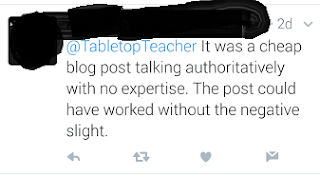 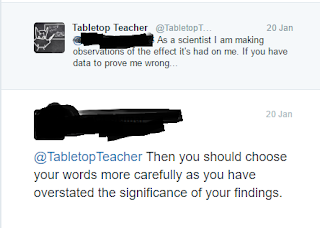 We then move to goal post shifting. Apparently it's not what I said, but how I said it that was The Real Issue. Again, Straw Man resurfaces saying that I am being too negative. I think in one paragraph of the blog post I was overly hyperbolic. That's probably true. I was writing that on late night duty in the boarding house, and was getting tired.

They then continued hinting that there was an incoming Duardin (Dwarf) release for Age of Sigmar. The logical fallacy here is simple. It's a lie.

To which all you need to do is ask for information. 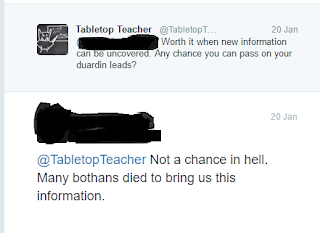 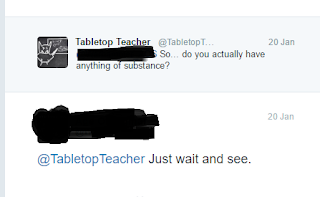 
Pro-tip: Being evasive and all mysterious doesn't work on a Scientist. It's evidence, logic, or nothing. And this is what the tweeter had. Nothing. At this point it was fairly late in the evening, and they were probably not thinking straight. Doubling down on this special information that they alone possessed and couldn't possibly share seemed like a good idea at the time. But in the end it just made them look rather foolish.

There's just one more thing that I want to talk about, and it's really difficult to mention without putting the tweeters name in there. I'll skirt around it as much as possible.

That is a mention to the Twitter account of one of the faces of the GW Marketing team. It's an appeal to authority, with the intention of either shaming me into silence or an invitation to that member to come in and argue against me.

The thing is that the GW Marketing team are professionals. They wouldn't get drawn into an internet argument on Twitter, because it's a waste of time, and would only make them look bad. I hope if any read this blog they know I hold them in the highest regard for turning GW's marketing around, and really getting the player base involved again.

Related to this is the Tweeters name. They have taken the name of a Games Workshop product as their Twitter handle. They are hoping that people are duped into believing that they are the official Twitter account for that product. That is, at best, borrowing authority. At worst it is the act of a charlatan, a liar, trying to fool people into following them.

So, the tweeters sarcasm aside, this is what I have worked out with my rather mediocre powers of perception. That's pretty much going to be the end of the story for me, and I sincerely doubt anyone will care what happened between two internet nobodies.

It's also not the kind of content I want either my Twitter account or Blog to have. The only reason I go into detail like this now is as a teaching point for logical fallacies and debating technique. I am, as ever, open to comments and feedback if you think I'm wrong. Give me reasons to, and I will change my mind.

Also, since they deleted their tweets, I won.

If you really love what I do here, you can make a one off donation at my PayPal, or become a true hero to table top education and make a regular donation to my Patreon. Every Little helps!
Blog Analysis