Yeah, it's very early to speculate. We don't have any concrete evidence that there will be an 8th Edition, and by concrete I mean official statement from Games Workshop. There are rumours of course, and compelling evidence, but nothing firm yet.


However, using my crystal ball far more effective logic and reasoning, I think I can somewhat predict the future of monstrous creatures in 40K. As the rumours fly about, we keep hearing that we're going to get some mechanics of Age of Sigmar, and I think I know which ones.


Right now, Monstrous creatures are very powerful compared to other units. This is right and proper, otherwise we wouldn't give them the name Monstrous, and they would just be creatures. Or robots in the case of Eldar and Tau.


The biggest advantage of Monstrous Creatures is the fact they do not lose power over the course of the game. Typical units (Firewarriors, Terminators etc.) will lose influence and ability the more the game progresses. Even though a monstrous creature will have similar stats and rules as an infantry unit, the Monstrous Creature holds on to their Turn 1 damage output until they're dead.


They have more in common than you might think. Both have a 2+ save with a 5+ invulnerable. Both will have 5 wounds (in total). The terminators have an edge in close combat over the Riptide, which can move quicker and is tougher. Both have access to some heavy weapons, can Deep Strike, and both are considered the Elite of their respective armies. They also have somewhat similar points costs for the amount of wounds you get.


But the Riptide is overpowered, and the Terminators are barely used. Why?


A lot of it comes from mobility and threat range. A Riptide with it's 36-inch weaponry can affect more of the battlefield, and can zip across to objectives faster as well. But the real issue comes from how that point cost is protected.


Simply put, if you lose a wound on a terminator, you lose 20% of the units effectiveness. You lose the close combat attacks, and also the Stormbolter/Heavy weapon shots of the model lost. Lose that same wound on a Riptide, and it just keeps going.


Whilst a 1-wound Riptide is still a formidable bastion of firepower, the same cannot be said for a lone Terminator popping off it's two bolter shots a round. Therefore, the points investment you put into the Riptide is just worth more over the course of the battle.


Here's a graph to illustrate the point. Assuming 1 wound lost per turn over a 6 turn battle. 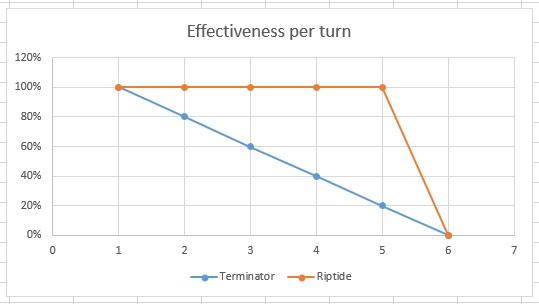 You can fix this by making the terminator firepower output stronger at the beginning of the game, but then you make alpha strikes from armies difficult to balance against attrition based armies. The problem is only compounded by reserves appearing in the middle of the game.


The best fix I've seen actually comes from Age of Sigmar. All the monstrous creatures and massive heroes in that system have variable stats based on the number of wounds they have:

This is taken from a Stormcast Eternal Stardrake, and shows how the power of this model declines when wounds are suffered. This puts it in line with other units, whilst still keeping it as an imposing model on the battlefield.


We can expect to see this design feature ported into 40K from Age of Sigmar. It doesn't take anything away or add anything to the current rule set, and if they follow the current AoS model of free downloadable war scrolls they can tweak troublesome monstrous creatures on the fly.


Imagine if a Wraithknight lost it's offensive melee power after it lost a few wounds. You could soften it up a bit before that Death or Glory charge with the lone Scout and his trusty krak grenade!

If you liked what you saw, and you want to help out, please visit and donate at my Patreon. Every Little helps!
40K ageofsigmar warhammer warhammer40K WarhammerCommunity